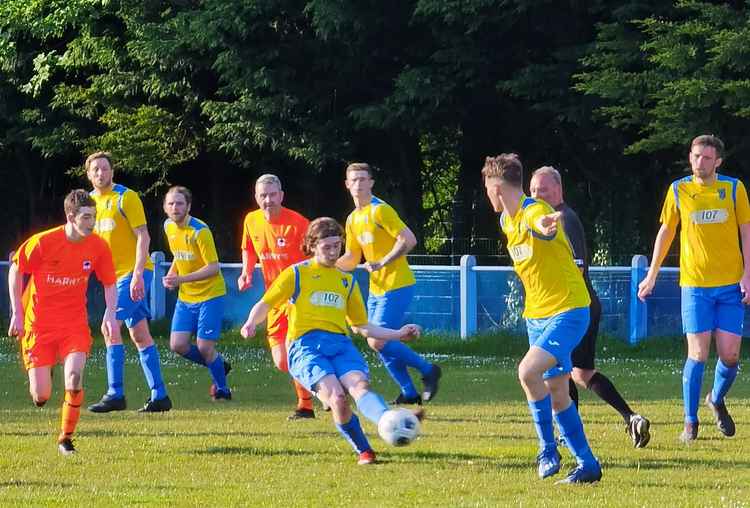 With the season drawing to a close, Heswall FC continued the quest for honours this week as our first team faced neighbours Neston Nomads in the latest of a number of games between our clubs, this time in the Wirral Senior Cup competition.

A fine performance from the lads with goals from Matty Morris, Paul Lindfield and another fine hat trick from top marksman Joe Ford paved the way to the semi-final where we face Mersey Royal. It will be a tough game to be played at Vauxhall’s, as our opponents have had a great first season back in the first division, challenging for the league title for long periods before narrowly losing out to South Liverpool. However, they did finish as the highest placed Wirral team.

On Tuesday evening, Gayton Park was the host for the Wirral District FA Under 13 final between Ashville Warriors and Shaftesbury FC. A well attended and exciting game went the way of the Shaftes team who won 3–0. The Warriors gave a strong performance and did their club proud. It was perhaps fitting that at the home of Heswall FC the team in yellow came out on top.

Wednesday night brought the final league game of the season for our Reserves and Aintree Villa Reserves were the visitors. With one eye on the upcoming Wirral Amateur Cup final on Monday, Manager Nathan Brooks was able to field six players aged 18 or under. A great opportunity for the lads to stake a claim for a place in the squad next season, and a great experience for them playing adult football for the first time. A good game finished goalless despite our guests hitting the woodwork on three occasions, and keeper Finn Collins making some good saves, enhancing his own growing reputation.

This bank holiday weekend brings the chance of the holy grail for our First Team as they travel to South Sefton Borough knowing only three points will bring Heswall promotion back to Division 1. It will be a tough contest against a strong side.

On Monday, both our First and Reserve teams are in Wirral Cup action, as the First Team travels to Vauxhall’s to face Mersey Royal in the Senior Cup Semi final, while the Reserves face Ellesmere Port FC in the Wirral Amateur Cup Final at Marine Park, home of West Kirby FC.

Spectators are truly welcome to attend this important match which has a £2 entrance fee. In fact, in a call to arms we ask the great people of Heswall to come out and support our lads. Kick-off is at 11am.

Weekends don’t come much bigger than this and we want you there with us as we represent the town and strive to bring silverware back to Gayton Park.